It pains me to have to ask the question but a few things have happened in recent days (and before that if I’m honest) that really make me wonder.

Take yesterday, for example. I was on my way to the supermarket at around 3 p.m. I was just approaching it when I noticed a man sitting on the street, yelling at the top of his voice, and smashing beer bottles on the ground beside him. Now, people drinking beer in public at all hours of the day and night, broken glass and random shouters are nothing out of the ordinary in Berlin – though I did think it a little wasteful that he was smashing full bottles.

It was around then that a bottle whizzed past my head and smashed against the supermarket wall. I can’t know if he was aiming at me or if he just fancied a more challenging throw but I wasn’t sticking around to find out. I ran, the sound of another beer bottle exploding into smithereens just behind me ringing in my ears.

I hightailed it into the supermarket, which was, luckily, practically empty. I walked over to the cashier.

Me: There’s a crazy man outside throwing beer bottles at the wall.

Me: There’s a crazy man outside throwing beer bottles at the wall.

Him: What’s he doing?

Admittedly, I was a bit shaken so my German was probably a little hairy.

Me: He’s throwing bottles against the wall. It’s very dangerous for customers.

That got his attention so he went outside to investigate. I pointed out the man who could have brained me but it turned out I didn’t really need to; a small crowd had gathered and another man was already calling the police. I decided there was nothing else for me to do but carry on with my shopping – now that I still had a head, it would be necessary for me to eat again at some point.

The (rather young and sexy) police showed up just as I was waiting at the cash register and it was all super-dramatic – which way did he go? What does he look like? A description being shouted back, the cops running (sexily) back out the door and peeling off in their waiting van as more sirens got closer.

As I left, I noticed that the man who’d called the police was bleeding quite heavily from one of his legs so I felt even more fortunate that I’d avoided being hit. I have no idea if the police caught him but I learned that the supermarket has cameras on its tills and he’d bought the crate of beer there, so there’s a good chance they’ll nail him. Good thing too – from what I’ve seen, that man has no place on the streets.

Of course, this is the sort of idiot that you can call the police on. But there are plenty more people out there who do their best to foul up Berlin for the rest of us. They range from the totally oblivious (morons on mobiles, for instance) to the “I’m so cool and awesome that normal rules of behaviour don’t apply to me” – yeah, I’m looking at you, gobshite who popped the cap off your beer bottle on the train today and hit me in the back with it. GOBSHITE.

However, it takes a special kind of asshole (two of them actually) to carry a sofa loaded with plastic sacks full of twigs and branches – don’t ask me why – throw the sacks over a wall and dump the sofa on the side of the street, as was witnessed by me and Manfredas from our balcony two nights ago. 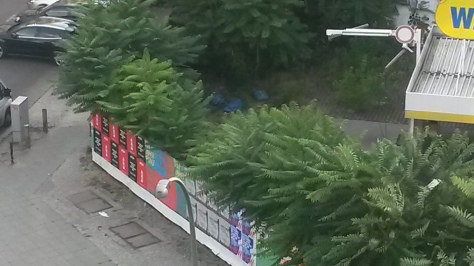 And while you might think that these guys are an exception, unfortunately that’s not true. Berlin has perfectly good dumps and, if you can’t make it there, you can arrange an appointment for the BSR to come and pick up your unwanted crap. Of course, you have to pay for this and that’s the problem – too many people in Berlin don’t want to pay for anything and would rather turn the city into their own personal dumping ground than do so.

I took these photos on a five-minute walk to the bakery this morning. And that was just one side of the street.

As this post has got a bit rantier than I’d intended, I’ll wrap it up by saying that I still love this city. I really do. There are freedoms afforded to people in Berlin that should never be taken for granted – the freedom to go wherever you want, to be whoever you want to be, and to do whatever you want (within reason).

The thing about freedom is that, with it, comes responsibility and that is what I’m noticing more and more these days. So many people just don’t want to take responsibility for anything – and have zero respect for other people or their surroundings.

If I’ve come across as a sanctimonious dipshit in this post then I’m sorry, but I really don’t think that a little accountability is too much to ask for.

Follow Expat Eye on Germany on WordPress.com
Join 677 other followers