With the Germans on the road in their camper vans or off stealing sunbeds in Mallorca, there’s nobody left in Berlin for me to teach so it seemed like as good a time as any to take a holiday myself.

Our first main destination was to be Salzburg but that’s a bit of a monster drive from Berlin so we decided to overnight in a pretty little Bavarian village called Schechen.

Still, as much as they like a good pray, the Bavarians are also rather partial to a good party, which is why you shouldn’t be overly surprised when you come across something like this:

Anyway, after a walk around the town centre (approximately 2.5 minutes), we headed back to our Gasthaus which also had rather a nice beer garden. It seemed to be a pretty popular spot with the locals – it turned out to be the only spot – so we sipped our drinks and tried to understand what in the hell the other guests were saying. Bavarian, if you didn’t know, is not at all like “normal German” so it was a total mystery to both of us.

I ordered a Schnitzel which turned out to be the best one I’ve ever had. But still, I’m no match for German portions and the Schnitzel won, as bloody usual. It was while I was trying to wash it down with wine that I was attacked by the most vicious mosquitoes I’ve ever come across. Maybe they couldn’t understand me telling them to “Fuck Off!” in normal German and English so I ended up being bitten 10 times in under 10 minutes. We retreated to our room and hoped God would protect us as we slept…

The next morning, after a gigantic German breakfast, we were on the road again. With the sun shining and the temperature around 30 degrees, we decided to stop off at Lake Chiemsee, which was absolutely lovely and jam-packed with frolicking Germans. Clearly this is what they’re up to when they’re supposed to be at English lessons… 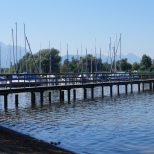 Beers cooling in the water

After almost burning my arse off on a seat and almost freezing my feet off in the water, we set off for Salzburg. This is where the Bavarian countryside starts to get really pretty and I was ooh-ing, aah-ing and singing the whole way. Lucky Manfredas…

Just before the border crossing, we pulled over to buy the sticker you need to have on display if you want to drive on the Austrian Autobahn. Manfredas also pulled two hi-vis vests out of the boot – seemingly you need to have them in the car to drive in Austria. (And that’s it for “Linda’s Random Facts You Probably Aren’t Interested In” – for now anyway.)

We arrived at our AirBnB apartment at around 2pm and met with the cute Polish-Russian host couple, who gave us a little guided tour, handed over the keys and then headed off to Italy for a couple of days. After a quick freshen-up, we hit the streets. The flat was in a great location so after around five minutes, we were in the centre of the Old City.

Salzburg has to be one of the most dreamily-located cities in Europe – it lies on the River Salzach, is renowned for its Baroque architecture and is surrounded by the Alps on all sides. Some guy called Mozart was also born here… 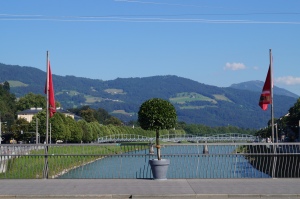 The city is known for being incredibly rainy but we were in luck and it was blue skies all the way. After lunch at the perfectly named “Wein & Co”, we caught the bus to Hellbrunn, home to a palace, a park and trick fountains. I’d read about the trick fountains online and was intrigued so we bought tour tickets (you can only see them on a guided tour) and prepared to be amazed…

What I wasn’t prepared for was how wet I would get. While you’re admiring the fountains, the tour guide sneaks over and switches on jets of water that hit you from all sides. You never know where they’re coming from next so it’s either a laugh or a squeal a minute. The best you can try to do is find a dry spot to stand in but there’s really no way to avoid getting wet – which is a bit scary when you’ve got a nice camera or phone in your hand. One Chinese girl screamed her way through the entire tour, which was massively entertaining.

After drying off a bit in the park, we caught the bus back into town for some dinner and to find somewhere to watch the opening match of the Bundesliga. We settled upon my favourite kind of bar – dodgy – at the end of our street. There was no football, only some local characters and a semi-toothless Indian owner.

We chatted a bit with the locals who weren’t asleep and despite me calling one man’s tattoo a “tramp stamp”, we were invited back the next evening for a drink and a tour of where the locals go on a Saturday night. On a trip to the unlockable ladies’ loo, I came across something you probably don’t find in the guidebooks…

Of course, I couldn’t resist. I’m not sure when the last time it was used was but Manfredas told me every eyebrow in the bar raised when they heard the “clunk, clunk” of the coin dial. Still, I wasn’t disappointed: 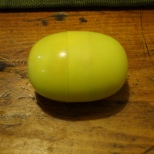 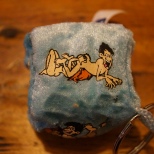 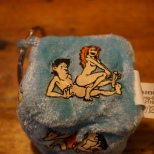 Clearly enchanted by my cackling, the owner gave me a quite nice beaded necklace he found in a drawer.

Dodgy bars are always the most fun.

On Sunday evening, I made my first rookie mistake in Germany. I was standing at the bar of Berlin Oktoberfest with Paddy, the German leprechaun, when he asked the fateful question, “Big or small?”

Clearly experiencing a massive brain fart, I scoffed and answered, “Big, of course”. You see, in Ireland, “big” means a pint, and no self-respecting Irish woman would ever be seen drinking a half-pint. How I’d forgotten I was in Germany, I don’t know, but I was presented with a beer I could hardly carry to the table. I managed though, don’t worry…

And so we chatted away for a few hours, soaking up the atmosphere, while the band played traditional German favourites like “Take me Home, Country Roads”.

The next morning, God knows how, I was up at 4am for what I hoped would be my final battle with the Bürgeramt. My plan was to get to Frankfurter Allee for 7 (an hour before the office opened), be out of there by 9, and back in bed by 10.

I found the building, and joined the already rather long queue. I got talking to the Finnish girl who got there just after me, and we eventually reached the ticket desk at 8.30. I was number 74. At this stage, there were also around 200 people behind us.

The woman at the ticket desk told us we could leave for an hour and come back, or just go and sit in the waiting room on the first floor. Not willing to risk our numbers being called while we were off drinking tea, we hightailed it to the waiting room. It turns out we needn’t have worried. 9am rolled by, 10am, 11am… everyone’s heads turning towards the display screen like meerkats every time it pinged up a new number.

I knew I had to leave at 12.15, and was starting to despair at around 11.45 when they were still only in the mid-fifties. I was loudly voicing my displeasure when, miracle of miracles, 74 popped up on the screen! Yes, it turns out that there is NO LOGIC to the Berlin Bürgeramt system. I jumped up like the winner of “Fastest Finger First” on “Who Wants to be a Millionaire?” and danced and whooped my way out of that room of lost souls. (I felt a bit bad about this afterwards, as I was definitely called ahead of people who’d been before me in the queue. I know this because I’d memorised their stupid early faces.)

Still, ten (only a little painful) minutes later, I was walking out of that Bürgeramt victorious, Meldebescheinigung in hand.

So, some tips for the newbies:

1. Book an appointment at any Bürgeramt a month or two BEFORE you arrive in Berlin.

2. If you fail to do this (and really, why would anyone ever think to do this), then you can try to make an appointment once you find an apartment. Unfortunately, these will be booked for at least the next month, and you run the risk of being fined if you don’t register within two weeks of moving in.

3. There are only two Bürgerämter (that I’m aware of) that take people without appointments – Yorckstrasse and Frankfurter Allee – and only on selected days at selected times. They open at 8am. Get there at 6 (or earlier), or get used to the idea of being there for 5+ hours. May the force be with you.

The next day, feeling triumphant, I decided to push my luck and open a bank account as well. I showed up at Deutsche Bank at 1.40, which is when I realised that German banks (or at least this bank) break for lunch. So, I wandered up and down Kurfürstendamm for 20 minutes. This street is like a who’s who of designers I could never afford – Chanel, Gucci, Louis Vuitton… Luckily, I didn’t like anything anyway.

At 2pm on the dot, the doors opened. A stunning smiley girl was waiting to ask people which service they wanted and help them find it. I was directed to a comfy sofa while she called her colleague. A few minutes later, an older man appeared and guided me into his office.

Fearing lengthy documents in German, I was more than relieved as we chuckled our way through the entire process. He’d ask me a question; I’d answer and he’d tick a box on the screen. I cracked excellent jokes to make him laugh, and he made me say things in German – also to make him laugh. Twenty minutes later, I was almost sad it was over.

Now I’m thinking, if all else fails, maybe I’ll just move into Deutsche Bank with Fritz and live happily ever after?

Follow Expat Eye on Germany on WordPress.com
Join 678 other subscribers