Me: Did I tell you I’m volunteering at a homeless thing tomorrow?

This has been going on between us for some time. For example:

Han: I quite fancy a sherry.

Me: Correct. I had a grand-aunt who used to drink sherry. It always reminds me of her. Auntie Peg.

Me: NEIN. Peg short for Margaret. English is weird sometimes.

But what was ML? Magnificent Linda? Majestic Linda? Selfless doesn’t start with an “m”…

And so, on Christmas Eve, I found myself on the S-Bahn on the way to Ostbahnhof, passing Germans on bikes, tandem bikes and scooters… walking, Nordic walking and jogging. These people never stop.

Anyway, Kälte Nothilfe – it roughly translates as “cold (weather) emergency aid” – were hosting an event at YAAM nightclub to feed the homeless in Berlin for the 6th year running; they were expecting over 1,000 people. There were several different ways in which people could help but, this year, I decided I would be hands-on and actually go there. Setting everything up would start at 11 a.m. and the guests would start arriving at around 2 p.m. At 10.45, I was walking past Stump Tower.

Having never done anything like this before, I really had no idea what to expect (though visions of me in an apron and hairnet slopping some kind of gruel into bowls had come to mind). I got to YAAM just before 11 o’clock along with a few other people. 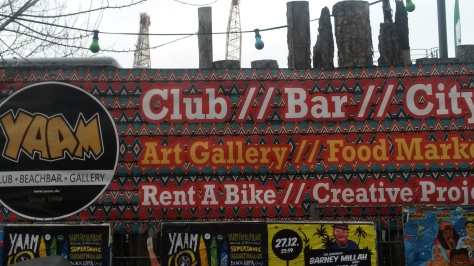 As it turned out, I didn’t have any time to worry about what I was going to be doing. Several vans were parked in front of the club and I joined the human chain carrying crates of food, drinks and various other stuff into the venue. As soon as I walked in the door, I was plunged into darkness and picked my way carefully across the floor to where people were depositing the crates on counters and tables. Seemingly, they were working on getting the lights to come on…

I had never seen so much food in one place in my life. None of us were really sure what to do at that point but luckily someone took charge and we started sorting everything into different “areas” – fruit, veg, sweet stuff, fresh bread, tetra pak, dairy, tea and coffee, toiletries, pet food, cigarettes… The lights also came on.

I was closest to the fruit and veg so it would have made sense for me to start there but half the time I didn’t know if the thing was fruit or veg. Is an avocado a fruit or a vegetable? I figured Googling it would have looked a bit weird. And what on earth was that terrifying-looking, red, spiky thing? Clearly, I was in uncharted territory here.

Toiletries done, I appointed myself “Head of Glühwein Transportation” and starting hauling the boxes over behind the bar.

I wanted to help the guy slicing the bread after that but there was only one knife. (Come on, people…)

Once everything was neatly organised, we started bringing in the Christmas trees.

The tables were set up and the decorating commenced. I realised that you can drop baubles on a concrete floor and they won’t break. Useful information. Tubs of white candy floss appeared (Weihnachtsmannbart – Santa Claus’s beard) and we draped it over the trees to look like snow. After getting through two tubs, my hands looked like Santa Claus’s beard so it was time to go to the bathroom to wash it off. Another girl was already there.

Even though the place essentially looks like a huge, bare warehouse, we managed to get it looking pretty festive.

I made my way to the “Garderobe” area where people were sorting out the clothing donations. I ended up working with a sweet, American, gay guy.

GG: Oh my GOD! This t-shirt is soooo cute!

(It was hideous – like someone had eaten 10 packs of Skittles and vomited the contents of their stomach onto some material.)

Me: I don’t think you’re allowed to take the stuff…

A German guy dropped a pair of trousers on the floor.

At this stage, the guests had started arriving. As is pretty typical for Berlin, it was kind of hard to tell who was homeless and who was just artfully distressed. A Johnny Cash t-shirt that I’d just folded (badly) was swiped by a guy wearing better clothes than I was. But that was OK because I definitely didn’t have my eye on it…

By now, pretty much everything was done. The first guests were helping themselves to the food, or sitting at the tables talking and eating, and the DJ had started. I was ravenous.

As I wasn’t really sure what the policy was on eating the homeless people’s food, I thought it was as good a time as any to leave. I hit the Backwerk at Ostbahnhof and got back on the train. An old homeless man was in the same carriage. In a move reminiscent of the Latvian Snot Rocket, he pressed his fingers down hard on one nostril, expelled the contents of the other onto the floor and then repeated the procedure on the other nostril. In the reflection on the window, I could see the snot dripping off his moustache and clinging to his beard. I immediately ran over and wiped it away with my bare hands, smiling at him beatifically as I did so.

I figured I’d done enough for one day and went for a glass of wine.

It all started one evening when I was arsing around on Facebook, and Veronica from The Dangerously Truthful Diary of a Sicilian Housewife popped up for a chat. We engaged in some very important discussions about life, love and the universe – or maybe I talked about my cup of tea – and then she told me about an idea that she and Pete, of Black Sheep fame, had come up with.

The idea was dangerously simple: invite funny expat bloggers from all over Europe to contribute to a comedy anthology, publish it on Amazon in time for Christmas and donate the proceeds to charity. They’d had the idea around nine months ago, but hadn’t really got around to doing anything about it.

While Irish Linda was lazily formulating the thought, “Ah sure, it’s grand. Eight months is no time at all, at all…”, German Linda efficiently stomped her and went into military mode. Within a day, we’d compiled a list of the bloggers we wanted to take part, emailed them to ask if they wanted to contribute, I appointed myself editor, and asked a friend to design the cover. Veronica would take on marketing the book and formatting it for Amazon. (Thankfully, as I am clueless about that stuff.)

“Uprooted and Undiluted” was born. I also gained the lovely title of “Linda the Whip”. (Thanks for that, Pete.)

Luckily, everyone else was just as taken with the idea as I was and, in no time at all, the blog posts started rolling in. We decided to divide it into topics, rather than simply by blogger, so we’d cover things like daily life, sexy time, man flu, battling red tape, and problems with learning the local language. I compiled all of the posts into one monster document and got down to it. Needless to say, it was a lot more work than I had initially thought; I finished editing it yesterday and my right hand now resembles a claw. The ‘N’ has also worn off my keyboard although that could be more a side effect of typing “NEIN” all the time.

We have bloggers covering Italy, Spain, Portugal, the Netherlands, England, Croatia, Sweden, France and, of course, I’ll be contributing my hilarious antics from both Latvia and Germany. You can find the full list of writers on my new page and, I have to say, they really are a funny bunch – editing the book was incredibly difficult as I just couldn’t stop laughing.

As I mentioned, the proceeds of the book will go to charity. Now you’d think it would be pretty easy to give money away, right? NEIN (sorry, N). We contacted a couple of major international charities to ask if we could use their logo and donate the money to them. The amount of hoop-jumping and bureaucracy they wanted us to go through would make even a German’s head spin. One actually wanted us to sign a contract guaranteeing a minimum annual donation… Um, what? Can’t we just give you the money?

In the end, Veronica came to the rescue by emailing an old friend who’d set up a charity called Hands Together that builds schools in Nepal. They were absolutely thrilled to be part of the project and we are delighted to be donating the money to such a worthy cause. They’ve offered to help us market the book in any way they can, and the Chairperson, none other than the Absolutely Fabulous Joanna Lumley, is even going to write a foreword for us.

With the editing done, the cover a day or two from completion, and the charity on board, it’s all starting to feel very real. I have no problem admitting that I am stupidly excited about it all. I think the book is fantastic and I hope that everyone immediately rushes out and buys a copy. Or, rather, sits comfortably in their armchair and clicks a couple of times. (Technology, eh?)

You’d better be quick though, before Mammy O’Grady buys them all.

The Facebook page can be found here – ‪#‎uprootedandundiluted‬. I think. I still don’t really understand what hashtags do…