We left while I could still walk under the weight of all the food and headed for the Altstadt (Old City) of Münster in search of German prettiness. I have to admit, from the area we had been in the night before, I was starting to think that the internet had lied to me about Münster being so scenic.

But, fear not. Yet again, Germany did not disappoint. For those interested in a little extra information – the rest of you can skip this paragraph – Münster is a city in North Rhine-Westphalia and is considered to be the cultural capital of the region. Münster was where the treaty of Westphalia was signed in 1648, putting an end to the Thirty Years’ War in Germany. Today, it has a population of around 300,000 and is known as the bicycle capital of Germany.

With Manfredas periodically sweeping me out of the cycle lanes, we wandered around while I took photos of the beautiful buildings. Considering he’s been there umpteen times, Manfredas wasn’t much of a tour guide. Instead, he read the plaques on the sides of the buildings to me which, really, I could have done myself… (Ungrateful much, Linda?) Seemingly, there’s also a Latvian high school but, tragically, we missed that…

Anyway, after walking around for under an hour, we’d worked up a bit of a thirst. We found a likely-looking café and, as it was a mild day, sat outside. Germans and their love of Luft and lüften… as long as it’s not lashing rain or below freezing, you’ll find them sitting outside. I huddled up under a blanket and we ordered some wine.

The great thing about being in a smaller city is that you’re really under no pressure to rush around visiting all the “MUST-SEE” sights. We had had a nice stroll and now we were more than content to relax and chat with a few glasses of vino. The perfect day. Until the sirens started.

Me: Oooh, a demonstration!

Me: What’s it about? No more refugees?

Manfredas: No, the other side.

So, I dashed off to take a photo of the 20-30 people in Münster who think taking in more refugees is a good idea.

With darkness starting to fall, we decided to head back to the B&B for a power nap before dinner. 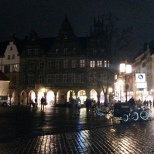 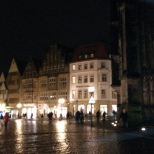 Clearly, Barbara had been up to her old tricks with the lüften again and the room was like an ice-box. Still, once I thawed out, I managed to get in a bit of shut-eye and, after a quick change, we were off out for dinner. Café Garbo picked up where breakfast had left off and served me my own body weight in Frikadellen (German meatballs) and fried potatoes. This time, I was too in shock at the size of the portion to take a photo… or I just ate it. You decide.

Manfredas rolled me into a taxi, and we drove to Kittys Trinksalon to meet up with a couple of his friends from the night before. Outside Kittys, I spied what is possibly the best invention I have ever seen…

You dirty-minded bunch of…

This is what it actually was.

Having laughed myself sober, we headed for Münster’s Rock Factory where, I was told, no tourists ever go.

We were stamped on our way in and didn’t make it out until around 4am. Well, I had to keep the Berlin side up, after all. The next morning, I woke up with a very fetching imprint of the stamp on the outside of my thigh which will give you a brief insight into how I sleep – if you ever wanted it.

We had booked breakfast for that morning so we went downstairs to see the ever-cheerful Barbara.

Scrambled eggs, fruit in Greek yogurt, more bread than you could shake a stick at, juice, and as much tea and coffee as you could drink. I would definitely stay at Barbara’s again.

Barbara: (peals of laughter) I love getting foreigners to say that word!!

Manfredas was clearly about to crack a smile but then realised that he would have to spend five hours in a car with a potentially annoyed Irish woman so he held it in. Germans are very sensible people.

Once Barbara had picked herself up off the floor, we hugged goodbye and Manfredas and I hit the road again. Luckily for him, I was exhausted after the night before so I slept for most of the first couple of hours. We stopped off at the Marienborn Memorial, the largest border crossing during the division of Germany. A bleaker, grimmer place would be hard to find.

Luckily, there was a truck-stop restaurant and shop nearby so we popped in for a Sitzpinkel and some food. It seems that where Germany depresses you one minute, it instantly tries to cheer you up in the next…

Little did I realise that the best was yet to come…