I feel like my inner German is growing stronger by the day. I’ve even started glaring at people who jaywalk – not because I disapprove, but because it seems like rather a German thing to do.

The process is being accelerated by the fact that I live with two German girls, and I believe that their German influence over me is stronger than my Irish influence over them. Although, in the beginning, I thought that the Irish might win out.

Hildeberta: Last night I had a night that you would be proud of.

Me: I assume that something terribly sophisticated happened.

Hildeberta: HA! NO! (A classic example of that German delusion-crushing directness you’ve probably heard about.) No, no, I ended up drinking with a bunch of randoms in some gay bar, then somehow found myself in an African bar, then finished the night sitting in the road eating pizza with a homeless guy.

Me: Hmm. Yeah, that does sound more like something I would do…

However, despite this little Irish blip, it is, most definitely, a German apartment. This is mainly evidenced in the fact that it is spotless – apart from my room, obviously.

The reason for this is that Germans never stop cleaning. Even when something is clean, they’ll clean over the clean – just for good measure. When it comes to O’Grady vs Germ, I adopt a very ‘live and let live’ attitude – it’s worked for me so far. When it comes to German vs Germ… well, let’s just say you feel sorry for any germ that has the audacity to lurk on German soil.

I think that all of this might, one day, have the effect of turning me into a semi-decent Hausfrau. The other day, I actually hoovered – spontaneously. However, I feel that my progress may not be speedy enough for ze Germans.

Last week, I was über proud of myself when I finished a carton of milk and remembered to put it into the “cardboard” bin. I swaggered off somewhere and came back to find Hildegard standing in the kitchen holding the offending item. I’d messed up in two ways –

2. I’d put it into the “cardboard” bin, when it was lined with plastic and probably still contained some drops of milk. (Actually, I knew it did.)

Hildegard: I know! It’s such a German thing!

Although she was laughing, there was German steel in there at the same time. I then got my first lesson in Mülltrennung (rubbish separation), the one thing every foreigner dreads when they move to Germany. 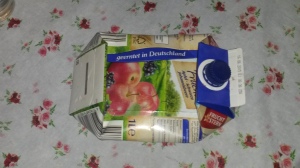 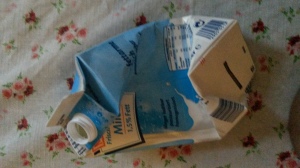 Guess which one is mine…

Still, I console myself with the fact that while my German Hausfrau-ness is a work in progress, my German beer-drinking abilities are second to none. Well, apart from the Germans – natürlich.