I spend quite a bit of time in my local bar, perhaps too much some might say. It’s owned and mainly staffed by Croatians and features a motley crew of locals, all of whom have been very friendly and welcoming to the weird Irish chick who showed up in their midst one day. In fact, it’s where I learned a lot of my German as the men there seem very keen to talk to me – probably because I lower the average age by about 20 years and wear a dress sometimes.

Over the course of several months, I noticed that the “Club Room” adjacent to the main bar was empty most evenings and, over a few glasses of wine, I came up with the idea to start an “English Club”. As there are so many interesting ways for foreigners to learn German in Berlin, I thought it might be nice to give the Germans a chance to learn English in a slightly different way.

I spoke to the owner and ran the idea past him. He was all for it and, most importantly, using the room would be free of charge as I’d (hopefully) be bringing in new customers. I spent a little while mulling over the Club and how it would work and put together a poster to publicise it in the bar. I was pretty pleased with it but sent it to Manfredas anyway to get a German’s opinion.

Manfredas: NEIN! Das geht gar nicht! Germans want details. They want to know WHY they’re going somewhere and what to expect when they get there.

Back to the drawing board. I added every possible detail I could think of and, this time, it got the Manfredas seal of approval. I stuck the posters up in the bar, and posted a couple of notices on local websites. Manfredas had stolen some flipchart paper for me (Germans can be quite wild…) and I set off to the bar on that first Tuesday evening at around 5.30.

The idea behind English Club is that people can come and practise and improve their English in a relaxed environment, over a couple of beers, once a week at 6pm. I’d pick a different topic every week and we would discuss it together. I stuck the flipchart paper to the back of the door, took out and lined up the 20 pens that I’d bought, prepared my materials and waited.

Two people came. Success! The topic that I’d prepared – ordering in a restaurant – proved to be woefully inadequate. Like a lot of Germans, these guys were waaaaaaaaaaaaay beyond that level. I had no idea that the people who showed up would already be so good at English. Still, we chatted away merrily for the hour and all was well with the English Club.

The next week, I had a rethink and picked some more advanced materials. A few more people showed up and we had a grand old time.

I’ve since bought a whiteboard which I use to write up new vocabulary and do corrections at the end of the hour. The next day, I email any new words and the corrections to participants, or post them on the Club Facebook page.

I’ve been doing it for a few months now and a little while ago, a journalist from Kiez Report (a video blog on the local area) said that he’d like to do an interview about the English Club with me. My desire to boost English Club’s popularity won out over the horror of seeing myself on camera and I decided to do it. After all, the journalist’s name was Patrick – what could possibly go wrong?

I wasn’t sure what I’d been expecting but whatever it was, it didn’t involve tripods or professional lighting. Patrick said that he’d like to ask me the first question in German and then we could continue in English. ARGH!

Squinting into the light, I mumbled something that sounded vaguely like German, albeit with a strong Irish accent, and then we switched to English. It was actually…fun! Patrick stayed for the whole hour and interviewed one of the participants at the end who, thankfully, was very complimentary about me and my little English Club.

If you want a chuckle, you can watch the video here.

In German, you can add the word “Sau” (sow) to quite a lot of other words to add some porky emphasis to your point. So, for example, “saukalt” (pigging cold), “saublöd” (pigging stupid), or “saugeil” (frigging great) are all possible.

In my efforts to amaze and impress my students, I like to bust out a few German expressions every now and then. This is normally met with reactions like, “AWWWWW!” and “Aww, so süß!” (Aww, how sweet!), but I persevere anyway.

So I was at a lesson, one rainy afternoon…

Linda-brain in overdrive is a dangerous thing and, really, something that should be prevented from happening with any sort of regularity. But, on this occasion, there was no stopping me. My brain hit the ground running – there’s a nice image for you – and, by that evening, I was ready to share my profound new theories with my unfortunate German friend. I installed myself on the sofa and prepared to make linguistic history.

Me: So, I’ve been thinking…

Me: You know the English word “sausage”?

Me: Yes, yes, but listen. What if “sausage” comes from those two German words?

Me: I mean, maybe, back in the day, in a village called BAD Wurstemburg or something, there was a local guy who used to sell pigs at the market? He’d have called out descriptions of the pigs and “Get your pigs, five for fifty!” or something, making him…

Me: The Pig Sayer! Sausager!

Me: Or, OR, maybe in BAD Wurstemburg, or wherever, the pigs developed kind of an attitude problem and the locals found it hard to deal with them.

LSF: (Pours another glass of wine)

Me: (Singing) Who they gonna call? THE PIG SAYER!

Me: You know, he’d have been like Robert Redford with the horse-whispering, except in Lederhosen – and with pigs, obviously. Whenever someone had an uppity pig on their hands, they’d send for Sieghard the Sausager.

Me: But “sausager” was a bit too cumbersome for native English speakers to get their poor little tongues around so they shortened it to “sausage”! Ta-dah!

LSF: Is any of that true?

Of course, it turned out that I was talking absolute nonsense. The word “sausage” actually comes from the old Northern French word, “saussiche”. How dull. Anyway, it’s all sausage to me. I live to drivel another day. My apologies to any Germans who make my acquaintance.

I’ve been living in Germany for over a year now and my German has come a long way from the “My name is Linda. I come from Ireland.” I arrived with. Of course, I still haven’t come as far as I would like and my natural lack of patience isn’t helping. But instead of bitching about it, I’ve come up with a goal – be B1 level by the end of the year, and B2 by this time next year. 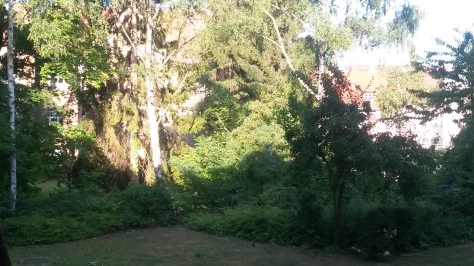 As you can imagine, this is going to take a lot of time and effort so, in a bid to succeed, I have launched a multi-pronged attack on every aspect of the German language.

The first, and probably most obvious, step was to start taking private German lessons. I realised pretty quickly that group classes weren’t really for me as listening to an Italian murder the German language didn’t do much for my German. Plus, I get to talk about myself – a lot – and my teacher has to listen to me because I’m paying her to do just that. I’m sure the comedy value she gets out of listening to me babble away about my life is almost as dear to her as the money. I think it’s probably the most entertaining 75 minutes of her week. I also go to a “Bier trinken und Deutsch sprechen” evening once a month which is I think is pretty close to being the most fabulous idea ever.

My friend Simone over at Lady of the Cakes is kindly helping me out by sending me a language challenge every day. These are met with spectacular language fails on my side.

Simone: How would you say “The leaves will have turned red.”?

Me: What? That’s future perfect! I couldn’t possibly know that at my level!

Simone: It’s supposed to be a challenge.

Me: (Google translating “the leaves”)

Me: The leaves *utter nonsense*

Me: The leaves *more utter nonsense*

Me: *something vaguely resembling German*

Me: The leaves will have turned red.

And then I rejoice and congratulate myself – until the next day.

Trips to my local bar are a great way to get me talking in German – and nicely lubricated. The old men in there have a bit of a soft spot for me so are more than willing to let me torture them with my Saudeutsch while engaging in some harmless knee-patting. If the hand starts moving up my leg, it’s time to go.

I also watch German TV every day. Frauentausch (Wife Swap) is great for learning vocabulary related to avoiding getting a job, and Die Höhle der Löwen (Lions’ Den) is doing wonders for my business German. It doesn’t hurt that I have a major crush on one of the Wolves. Yes, Jochen Schweizer, I’m talking about you.

My fascination with the man has gone so far that I’ve even bought his latest book and am attempting to read it. I underline every word I don’t understand while reading on the train, then look them up when I get home and compile them into a glossary in a file saved as “Jochen”. I’m almost sure it’s not as creepy as it sounds.

The next step will be to find a German boyfriend. Any takers? I figure it’s cheaper to ask here than to join an online dating site. However, I am also thinking about doing that, mainly to see if German men like sending dick pics as much as their Latvian counterparts.

There could be fun times ahead…

You can read about my Latvian online dating adventures here – https://expateyeonlatvia.wordpress.com/2013/11/12/from-your-sofa-no-one-can-hear-you-scream/