I’m not normally one to complain (ahem) but today really took the piss. It actually started yesterday with monsoon-like rain all day, which instantly flooded the city causing major traffic delays, flooded U-Bahn stations, knee-deep water in some buses, building evacuations and, because it’s Berlin, people swimming down major streets and being pulled along in dinghies while drinking beer.

A storm in German is “Sturm” or “Gewitter” – a really bad storm is called “Unwetter” which, in English, would be unweather. Obviously this makes no sense at all as it’s actually ALL the weather in one go and not even remotely unweather. But hey, German…

This morning, expecting delays, I set off for my lesson a bit earlier than usual, grimly plodding through the drizzle. The bus showed up and dropped me off at the U-Bahn station. What should have been a simple ten-minute ride was made impossible by the fact that around six stations along the way were closed due to flooding. This was one of them.

So I travelled two stops, got off, got on the replacement bus and waited while another 100 people squeezed their soggy selves in. The problem with that is that the doors don’t close when people are in the way of the sensors so other passengers were yelling at people to get off at each stop; one man’s beer belly held us up for a good five minutes.

The BVG (Berlin Transport Company) representative had “reliably” informed me that the bus was going all the way to Zoo, one stop past where I had to go. But no, the driver stopped at another U-Bahn station along the way claiming that the U-Bahn was running again. She kicked us all off, down we went and no, stupid cow, the U-Bahn was not running.

By this time, I was already half an hour late so I had no choice but to cancel my lesson. I waded across the road and actually managed to squeeze into a replacement taxi. Yes, things were so bad that the BVG were transporting people using TAXIS. Then it was back on the U-Bahn, back on the bus and, finally, home. It had taken me almost 2.5 hours to achieve absolutely nothing and end up back where I started.

I wrote a scathing email to the BVG and consoled myself with the thought that I had a nice evening with my friend to look forward to – preferably with excess amounts of whiskey. Shortly afterwards, he messaged to say that he wasn’t feeling well and had to cancel. My opera singing neighbour started up and I contemplated justifiable homicide.

Still, I had to calm myself down as I had another lesson to go to this afternoon. I had carefully checked to make sure that the S-Bahn was running normally and set off. I got to the station right on time only to see the three words that every German dreads – Zug fällt aus. My train had “fallen out” and the next one wasn’t until 11 minutes later.

A torrent of swear words, a bit like the torrents of rain, ensued. I sent my student a message telling her I’d be a few minutes late. She was actually happy enough as she’d ordered cake and would now have time to eat it. Nothing makes a German happier than coffee and cake.

After walking up the stairs (because of a broken escalator) and being accosted by a rude beggar, I eventually made it to the lesson. While I spoke flawless German, the barista insisted on answering in English – which resulted in him receiving a von Grady growl. It started raining halfway through the lesson and by the time I left, it was more unweather.

The town that I’d left just a couple of hours earlier was now a swimming pool. My boots weren’t quite up to the challenge and I squelched my way home, as engulfed in misery and self-pity as my feet were in water.

Manfredas: Hey, do you fancy dinner at the Surf Inn?

Manfredas: As long as it isn’t flooded. But I guess then we could “surf in”.

It’s summer in Berlin which means that there are around ten festivals happening every week. In fact, there’s so much going on, it can be close to impossible to decide what to do. This weekend, however, the choice was easy. My two favourite words were mashed together into one German word and the decision was made. Weinfest.

After a relaxing brunch, Manfredas and I hopped on the bus to Britzer Garten. I had been there once before and thought it was beautiful so I was looking forward to going again.

Unfortunately, the festival wasn’t being held in the park proper but in a side bit next to a windmill.

We walked for around 10 minutes after the bus journey, wondering at the lack of drunk people on the streets. Clearly, this wasn’t going to be a massive party.

We got there to find not much of anything at all.

There were only three stands in total and two of those were selling coffee and cheese. Erm, what? But there was ONE wine stand so we marched over there and asked the barman what was going on.

Weinman: Well, there were supposed to be four wineries here but two cancelled and the third crashed in the outskirts of Berlin so now it’s just me.

There wasn’t much we could say to that so we ordered a couple of glasses of Weißburgunder and sat down, lowering the average age of the revellers by around 30 years.

Manfredas: I’ve been thinking about why this isn’t really a fest.

Me: You mean apart from the lack of people and wine?

Manfredas: Yes, apart from that. It’s because there’s no sausage.

Me: I think they’re going for a more classy “wine and cheese” French-style of proceedings.

Since we’d come all that way, we decided to have a second glass and chill out for a while – the good thing about a fest with 20 people is that there is never a queue for the toilets. When we were around half-way through, a van pulled up and a band (dressed in American GI uniforms) stepped out.

They started at 6pm on the dot and the lead singer explained that they were normally Checkpoint Five but they were missing their drum and keyboard players so, that night, they were Checkpoint Light.

Me: Oh, hahahaha! This is just too funny! A wine fest with no wine and a band with no members! Ha hahahahaha! What are drums in German anyway?

Yes, we had started ordering wine by the bottle at that stage…

The band launched into energetic renditions of all the old American doo-wop classics, with every second song being an Elvis number. I was in heaven. Amazingly, the tables started filling up and we were soon sharing ours with a bunch of fun, middle-aged Germans.

They ordered a cheese plate which came with Schüttelbrot. Seemingly, it’s the preferred bread of the Alpine regions but it was far more fun whacking it off the table to try and break it than it was to attempt to eat it.

We all roared along with the music, providing percussion by beating the table with the bread. I’m pretty sure that Elvis was spinning in his grave by that point.

People were up dancing, the wine and conversation flowed and what could have been a total bust turned into a fantastic night out. 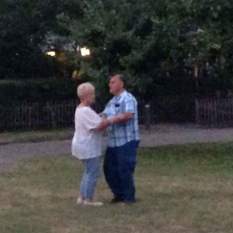 Even the Latvians turned up.

I can’t wait to go again next year. I only hope that it’s as disastrously funny as it was this year.

The third Alsace post will be up next week!