The problem with Berlin is that it’s just too much fun. Not that that’s much of a problem most of the time; it just makes leaving it, even for a short time, very difficult. However, I’m determined to start seeing a little bit more of the country over the next few months, and until the summer, this will probably take the form of some day trips, or weekend breaks.

First on the list was Leipzig and amazingly, I made it there last Sunday, only one day later than originally scheduled. (Blame Friday night for that one.) At 9.15, the bus rolled up at Alexanderplatz, our tickets were checked by the jovial driver, and at 9.30 on the dot, we were off.

Unfortunately, this is where I fail a little as a “travel writer”. I’d love to give you a flowery description of the scenic landscape we passed but I fell asleep and only woke up as we hit the outskirts of Leipzig. Instead I’ll say that there were probably some fields and trees and villages and let you visualise that in all its stunning glory…

Done? OK, moving on. After a 2.5 hour nap, there’s nothing I like more than a good feed so I took a stroll into the city centre in search of food. It was dry, if a little overcast, but I figured if it stayed like that all day, I would be pretty lucky, this being the end of January and all. My second breakfast decision was made as soon as I noticed an option on the chalkboard outside Central Café… 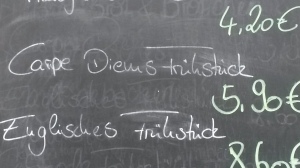 Because, you know, sometimes you just have to…

The café was cute and cosy, and the service friendly and efficient. To my delight, they had Flammkuchen on the menu, so I ordered that, a cup of tea, and a white wine – because I was on holiday. 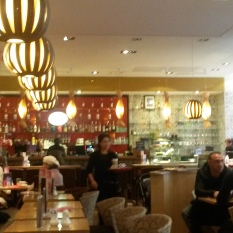 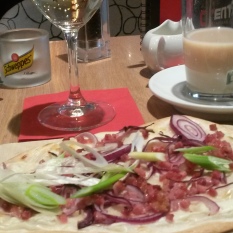 Though a little on the small side, the Flammkuchen was delicious and everything was going down a treat – until I noticed the couple sitting not far from me. Every time she spoke, he stared so intensely and lovingly at her lips, I thought he was going to eat her. It was slightly off-putting to say the least. Luckily, the drunkest man in the world walked in at that point and I kept myself entertained with the thought that he’d have to pick up his breakfast with his face, as his arms were firmly bound behind his back in the jacket he was struggling to take off. As I was leaving they were playing the song, “Lick my neck, my back, my pussy and my crack…”, which I thought was a little inappropriate for Sunday brunch but hey, this is Germany.

Unfortunately, the Leipziger I’d met in the queue for the loo at a hippie/hipster (who knows?) commune the weekend before had bailed on me, so I was on my own on the mean streets of Leipzig. I managed to take one cheery sunny photo before the sleet/hail/snow/rain that would last the rest of the day kicked in.

Leipzig is yet another of those cities that is dubbed the “mini-insert random city here” – in this case, “mini-Paris”. But don’t judge me – it was Goethe who said it first, back in his student days at Leipzig University. For a relatively small city, Leipzig actually packs quite a punch on the famous dead guy scene – Johann Sebastian Bach was a choirmaster here, Mozart and Mendelssohn both performed here, and Wagner was born here in 1813.

I first passed Nikolaikirche, but there was a service going on at the time and I’m banned from those now so I couldn’t go in.

In the absence of my hippie/hipster buddy, I’d printed out a page from the Frommer’s website which said that one of the best things to do in Leipzig was explore the Art Nouveau arcades that thread the old part of the city. As that sounded warm, I was convinced. 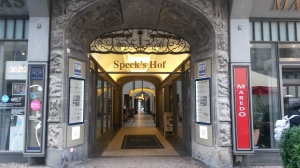 The most impressive of these passageways, by far, is the Mädler Mall, adorned with chandeliers, and home to the famous Auerbachs Keller, the setting for one of the scenes in Goethe’s Faust. Sculptures of some of the characters pique your curiosity about visiting the restaurant downstairs. 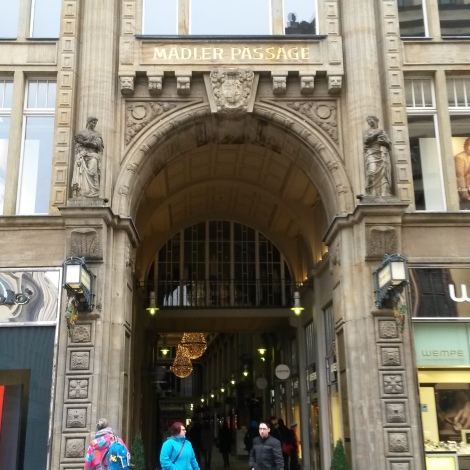 That woman’s coat tried to steal the limelight 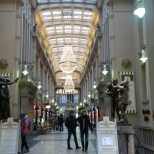 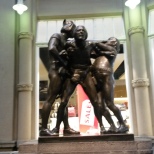 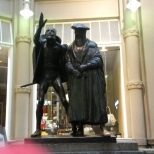 A quick look at the price-list, however, confirmed that I would not be eating there. Maybe it was cheaper in Goethe’s day.

I exited into the market square, which was market free on that day, but still very pretty, even in the gloom. 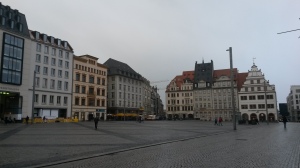 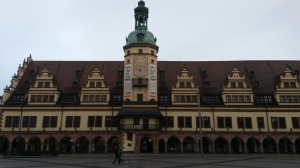 The Old Town Hall is now home to the City History Museum, so I made a mental note to come back and visit a bit later, and carried on. I was not disappointed.

YES! It was just what I’d always wanted! A shop selling eyes – and more! Thankfully, it was Sunday and the shop was closed. Otherwise I fear I would have purchased a load of eyes I really have no use for – and possibly more. Thank you Germany for your sensible Sunday shop closures.

Part two coming soon… (unless the Leipzig Tourist Board stops me)

So, where to begin? It seems like my perfectly ordered German life is unravelling slightly. I mainly put this down to my flatmate’s rapidly disintegrating mental state.

Yes, it appears that what I’d taken for (sort of) charming eccentricity is, in fact, stark raving looniness. The repeated (empty) promises to clear out the fridge, the bathroom and a cupboard in the living room were mere annoyances. The shaking and the sweating, while off-putting, could be viewed as semi-entertaining. The delusional babbling could be tuned out. Everything would be OK as he was going back to Sweden for almost two weeks, and I could sort things out here, while his parents hopefully had him committed in Sweden.

Wednesday rolled around and I clung to my last shreds of patience as Bjorn crashed around the apartment, banging off things, breaking things, flooding the bathroom, eventually ending up with a packed bag. He also offered me the use of his laptop which I knew he’d already packed. By the time he was ready to leave, he was really late so he had to call a taxi. I breathed a sigh of relief as he finally bashed his way out of the apartment, almost taking the door off its hinges in the process.

At 5.30, I dragged myself out of bed. I was covering four lessons for another teacher, and had to get to the other side of the city for 9.15. Unfortunately, Bjorn woke up too. Now, while I’m not generally known for my patience, I can keep myself in check in most situations. It turns out that a Swede in pajamas, rambling about how he’s Mother Teresa is not one of them.

Anyway, after a lot of shouting (and eating bacon), I made it out of the apartment. I got the metro to the next train and hopped on. I was actually early – yes, I’m that organised, even in the face of madness. Unfortunately, the transport system did not reward me. Works on the line meant finding a replacement bus to another train station, getting back on the train, but ultimately missing the last bus I had to take. A dash in a taxi meant that I arrived at 9.15 on the dot.

I sat down and waited. And waited. The students never showed up. The second group were 15 (very unGerman) minutes late. I had 45 minutes to scoff a bit of lunch and then two more groups – neither of which turned up. Then it was back to the bus-train-bus-train-train game. Needless to say, by the time I got home, I was not in a particularly good mood.

Bjorn was still talking like I’d been there the whole time. But it was OK – he’d be heading to the airport again in an hour or so. They’d managed to book him on another flight. I tuned him out as best I could and waited. Finally, he left. Oh, the sweet blessed relief! I took myself out to a local Greek restaurant and revelled in the lovely normal Germans, indulging in lovely normal conversations all around me.

I danced home, cracked open a bottle of wine, and was just toasting my blissful solitude when Bjorn walked back in. Now, one of the main reasons this apartment appealed to me was that my flatmate would be travelling a lot. I just didn’t realise that when he said “travelling”, he meant travelling to the airport and NEVER getting on a f****** plane.

So, when you realise your flatmate is a nutter, you’ve got two courses of action as I see it – try to help him, or avoid him as much as humanly possible. As I’m no psychiatrist, I went for the latter. Or, as the old saying goes, if life gives you lemons, go and drink wine and eat cake.

On Friday, I took myself off to pretty Potsdam and had a wonderful day. 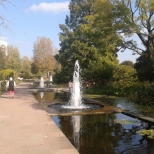 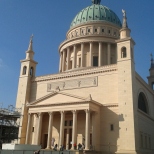 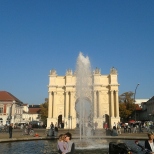 I watched Germans playing a game I don’t know the name of, but I like to call, “Germans throwing sticks at sticks while drinking beer”.

I went to the flea market at Tiergarten… and didn’t buy anything.

I experienced my first Flammkuchen…

and went for a wander around the park with my childhood friend. I didn’t even know he was living in Berlin until he read in the Latvian blog that I was moving here and got in touch.