I am officially declaring my first week and a half of living on my own a roaring success. But, I suspect that since posting these pictures… 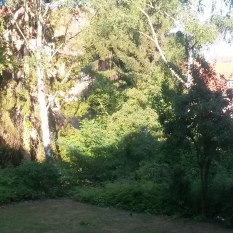 The view from my balcony

The river down the road

…some of you might think that I have taken to tree-hugging, stuff-picking, or whatever else it is people who live near forests do. Not so, dear reader. If there was ever a chance of that, I think it probably would have happened in Latvia, and the closest I came to tree-hugging there was being driven out of the country by stick-wielding local lunatics. (Slight exaggeration, but close enough.)

Far from feeling isolated from my beloved Berlin, I am feeling very much at home here. During the day, I get to scoff at tourists who spend 20 minutes standing in front of a map of the train system, and a further 20 minutes trying to figure out which ticket to buy; in the evenings, I get to come home to my tranquil little haven. It’s the perfect balance. In fact, living here feels a bit like living in a holiday camp, which I can’t recommend highly enough.

Despite being small, the town has absolutely everything I need for daily living – an efficient transport system, supermarkets, banks, a post office, shops, WOOLWORTH, bakeries, cafés, restaurants, bars, late-night shops (for midnight/Sunday wine runs) and even a little cinema. Oh, and there’s also a church for people who like that sort of thing.

In my back garden, there’s a table tennis table which I’ve never seen anyone using, but am planning to take full advantage of at the first possible opportunity. 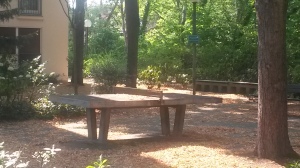 Just down the road in one direction, there’s mini-golf and archery, and in the other direction, there’s a swimming pool, tennis courts and an ice rink. In fact, all I need is some bad karaoke, bingo and ballroom dancing and I’d be living in Butlin’s. (For non-UK/Irish readers, Butlin’s is a famous holiday camp in the UK – think “Dirty Dancing”, but without the dirty bits.)

Dotted all around the town are pretty little allotments where the Mermans, “merry Germans” in case you’d forgotten, grow stuff, grill sausages, drink beer, bask in the sunshine, paddle in inflatable swimming pools and get naked a lot. This last one is, as yet, unconfirmed, but this is Germany so…

Naturally, I’ve also been to check out my new local bar. I first went last Sunday as a little treat for managing to lug my worldly possessions – solo – from one end of the city to the other. I was mildly perturbed to find that I was in the minority given that I didn’t have white hair, a walker or a wheelchair. Still, the punters were friendly, in a toothless, elderly sort of way.

Not one to give up so easily, I decided to return on a Saturday night to see what kind of crowd it brought in on a more “happening” night of the week. I had no sooner settled in with a nice glass of wine when the waiter came over.

Eggert: Those gentlemen over there would like to buy you a drink.

Feeling a bit like I was in a movie, I looked over to see three men of various ages/sizes grinning back at me.

When it came, I raised my glass to the gentlemen, thanked them in German and offered a pleasantry or two. This was greeted with looks of disappointment. Huh? Surely my German wasn’t that bad – it wasn’t like I was saying anything overly complicated. What was their problem?

As it turned out, their problem was that they didn’t have a word of German between them. They were Croatian builders who’d been in Germany for around ten days. Two out of three spoke passable English though, so in the end, we managed to have what was probably the most uproarious night that particular bar had ever seen.

With my flat kitted out, my internet provider coming on Wednesday and my new bar of choice selected, there is really only one thing left to do. Yup, it’s back to the dreaded Bürgeramt to re-re-re-re-re-register my address. I guess if they try to make me wait for hours on end again, I can just start screaming, “Nobody puts O’Grady in a corner!” and see where that gets me.

Follow Expat Eye on Germany on WordPress.com
Join 678 other subscribers